News
Share this page
UN Member States, the Secretary-General and the World Bank President call for action on the SEforALL recommendations for how to mobilize additional $120 billion a year. Addis Ababa, Ethiopia, July 13, 2015 - "We welcome the Secretary-General’s Sustainable Energy for All initiative as a useful framework, including its regional hubs, and the development of action agendas and investment prospectuses at country level, where appropriate. We call for action on its recommendations, with a combined potential to raise over $100 billion in annual investments by 2020, through market-based initiatives, partnerships and leveraging development banks." This is the call for action on SEforALL´s financing recommendations by the 193 United Nations member states in the Addis Ababa Action Agenda, agreed this week in Ethiopia. On Monday, Secretary-General Ban Ki-moon and World Bank President Jim Yong Kim, Co-Chairs of the Sustainable Energy for All Advisory Board, received the SEforALL finance committee’s report and recommendations for how to mobilise an additional $120 billion a year in sustainable energy investments. "It is timely that we receive the report and recommendations of the finance committee of our Sustainable Energy for All Advisory Board here in Addis," said the Secretary-General, speaking on the occasion of the High-Level Event on Financing Sustainable Energy for All during the Third International Conference on Financing for Development (FfD) in Addis Ababa, Ethiopia. "Bank of America has already put forward $1 billion dollars to mobilize an additional $10 billion dollars. I encourage others to follow suit," added the Secretary-General. 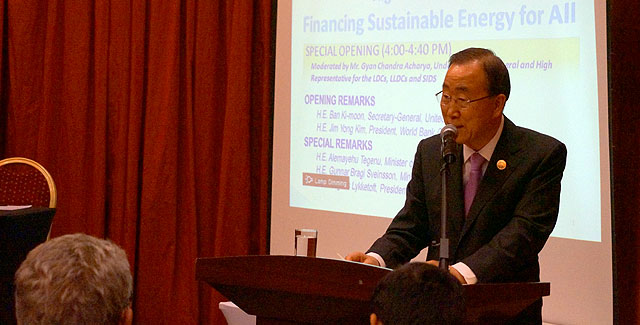 Besides sharing the passion for sustainable energy, his SEforALL Advisory Board Co-Chair, World Bank President Jim Yong Kim, also shares background with the Secretary-General, as both grew up in a post-war Korea. "1964, when I left the Republic of Korea and the Secretary-General was in college, the country was described as a hopeless case by World Bank reports. It was not able to get loans, and the predictions were that the country was a basketcase, " said Dr. Kim, well aware of that these predictions have later been proved wrong, and that energy played a big role in the change. The Republic of Korea´s transition story can serve as a source of inspiration for many countries, such as for the FfD Conference’s host country, Ethiopia. Ethiopia has bold plans for becoming a carbon neutral middle-income country by 2025. Powering this transition will naturally take sustainable energy. Ethiopia´s energy minister, Alemayehu Tegenu, told participants about his country’s impressive sustainable energy plans, including the development of the Grand Ethiopian Renaissance Dam - expected to become Africa’s largest upon completion in 2017. "The Government of Ethiopia has been committing significant public finances and mobilizing national resources for the development of the energy sector," said the Minister of Water, Irrigation and Energy, adding the roles of many committed development partners. "Ethiopia has prepared the Sustainable Energy for All National Action Plan with support from European Union in August 2014 to expand our renewable energy development program. Our energy sector vision and the proposed National Action Plan are very well aligned with the philosophy of and the three goals of the SEforALL initiative," added minister Tegenu. In addition to hydro, sun and other renewables, Africa is also starting to explore geothermal resources, something which Iceland continues to be ready to support, assured Foreign Minister Gunnar Bragi Sveinsson, Iceland being a firm supporter of SEforALL. "Iceland firmly believes that for many of the world’s energy poorest countries, geothermal can play a game-changing role by providing a base-load, clean and renewable energy for hundreds of millions of people," said minister Sveinsson. 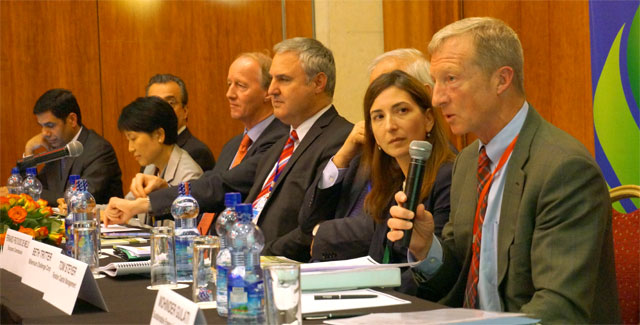 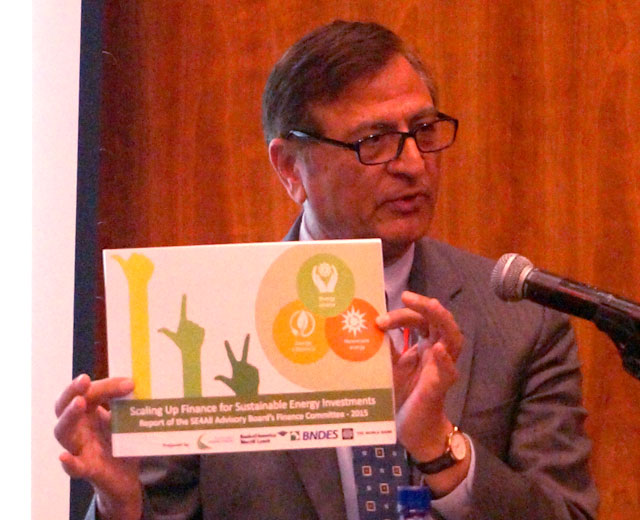 "A word of advice when trying to attract investments is that finance institutions don´t like surprises, they like standardization and producing the same product over and over again," said Mr. Steyer of Farallon Capital Management. "I would encourage everyone to have an extra look at page 34 of the SEforALL report - this pyramid pretty much sums up what we need to think about," said Ms. Tritter of Millennum Challenge Corp. "Technology is available and is getting cheaper. The challenge is often a lack of a pipeline of bankable projects," highlighted Dr. Ishii of the GEF, who also mentioned risk aversion as a challenge. "We remain committed to the three SEforALL objectives on energy access, energy efficiency and renewable energy, and we have recently launched the new financing facility ElectriFI," informed Mr. de Melo of the European Commission. "Rather than talking about private partners, I would describe them as commercial partners," said Mr. MacGeorge of the World Bank, stressing the role of multilateral development banks as playing a leveraging role for such actors. "Our study of SEforALL´s objective of doubling the share of renewables in the global energy mix shows that this could be done at negible additional cost, or with big savings if externalities of fossil fuels are counted in," said Mr. Wuester. "To progress even further, we need project development facilities - and as many as possible. SEforALL can play a role as a platform in this regard," said Mr. Ferraz of BNDES. "The challenge in vulnerable countries is often to bring projects to scale. Overall, we know that we will need five times the finance we have today," said Mr. Acharya of UN-OHRLLS, stressing the special needs of LDCs, SIDS and LLDCs.

1 in 7 people globally at high risk due to lack of access to cooling, with numbers set to rise by 2030