News
Share this page
Istanbul, Turkey, 2 October 2015 - Energy ministers from the G20 group of major economies have adopted an Energy Access Action Plan coordinated by the Sustainable Energy for All initiative (SEforALL) to help fight energy poverty by strengthening collaboration, sharing knowledge and breathing new life into existing initiatives, with an initial focus on electricity access in Sub-Saharan Africa. Drawn up at the request of the 2015 Turkish G20 Presidency, the plan – a voluntary collaboration mechanism for G20 members, drafted by SEforALL in cooperation with 15 international organizations including the African Development Bank, African Union, World Bank and International Energy Agency - was presented to the G20’s first ever Energy Ministers Meeting by SEforALL Chief Operating Officer Mohinder Gulati. “The Action Plan calls for increased coordination and an improved investment environment,” Turkish President Recep Tayyip Erdoğan said in his opening address to the meeting in Istanbul, acknowledging SEforALL as a key partner. “I believe the Action Plan will have an important role in that.” 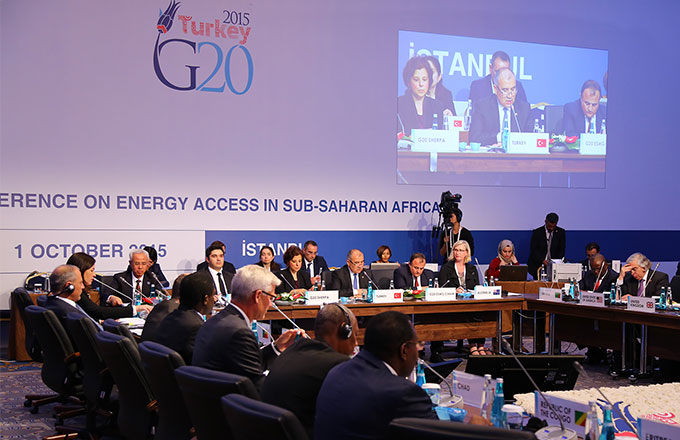 G20 leaders agreed last year to work together for universal energy access, setting increased collaboration on energy as one of their priorities and endorsing the G20 Principles on Energy Collaboration. These include an agreement to work together to “Ensure access to affordable and reliable energy for all”. In a communique after the meeting, the G20 energy ministers welcomed the inclusion of a specific goal on sustainable energy among the Sustainable Development Goals adopted by world leaders in New York last week, and pledged to “collaborate to move this goal forward”. The communique said the “G20 Energy Access Action Plan: Voluntary Collaboration on Energy Access” established a long-term voluntary cooperation framework. “We will work together with SEforALL, its Africa Hub, and other initiatives and donors, cooperating and collaborating with other relevant international and regional institutions and Sub-Saharan African countries,” the ministers said. “We stress the need for public-private partnerships, stakeholder alliances and strong political commitment to energy access.” The Action Plan aims to strengthen G20 collaboration on energy access issues in a flexible way, complementing existing regional and global initiatives to tackle energy poverty, and recognizing the right of each country to decide its own energy mix. The first phase highlights a number of possible options that G20 members could endorse or adopt to support energy access in sub-Saharan Africa, seen as the most urgent priority region, where two-thirds of people live without electricity. These optional actions are gathered under six thematic areas: policy and regulatory environment; technology development, dissemination and deployment; investment and finance; capacity building; regional integration; and coordination and collaboration. Future phases of the Action Plan could focus on other geographical regions and emphasize additional areas such as clean cooking solutions and women’s and children’s health. China, the next country to hold the G20 Presidency, has already said it will keep energy access firmly on the group’s agenda. SEforALL’s Global Facilitation Team will support collaboration under the Action Plan, cooperating with other relevant organizations to prepare regular input into the G20 Energy Sustainability Working Group (ESWG). The Action Plan also acknowledges the importance of providing enough resources to SEforALL and other international organizations to help this work to move ahead. The energy ministers also adopted a “Toolkit of Voluntary Options on Renewable Energy Deployment” and expressed support for energy efficiency measures and the phasing out of inefficient fossil fuel subsidies, while taking into account vulnerable groups and their development needs. The formal Energy Ministers Meeting followed a full-day G20 Conference on Energy Access in Sub-Saharan Africa, hosted by Turkey in collaboration with SEforALL, where G20 ministers were joined by more than a dozen energy ministers from non-G20 African countries. Speakers put a strong emphasis on concrete action and the need to identify and build an ongoing pipeline of bankable energy projects. “We did not want to come here and debate issues. Rather we wanted solutions,” said former SEforALL CEO Kandeh Yumkella, who chaired two morning panels: a business forum organized by the B20 Coalition of leading independent business associations from G20 economies on “Energy Investment Opportunities in Sub-Saharan Africa: Presentation of Transformative Investment Projects”, and a Davos- Style round table on “Moving the Needle in SSA’s Transformative Projects: How Can G20 catalyze real action?” In her keynote speech, Dr Elham Ibrahim, the African Union’s Commissioner for Energy and Infrastructure, said African countries could learn from G20 nations that have already built frameworks for investment that include a balance between public and private roles. “Increasing energy access in Africa will require scaling up investments in the energy sector to increase generating capacity and expand the transmission and distribution networks,” she said. Jamal Saghir, Senior Regional Advisor at the World Bank, said Africa needed to add 6 to 7 GW of installed capacity every year to achieve universal access by 2030, compared to a current annual increase of 1 to 2 GW. The quickest way to get results would be to focus on projects that have already been prepared across Africa, from geothermal energy in Ethiopia to wind power in Tanzania, solar energy in Senegal or hydroelectricity in Zambia, Guinea and Mali. “It’s time to stop talking about projects that don’t exist,” he said. We have a list of at least 20 projects that we believe are bankable, but we need to work with other partners. It’s all about leverage.” 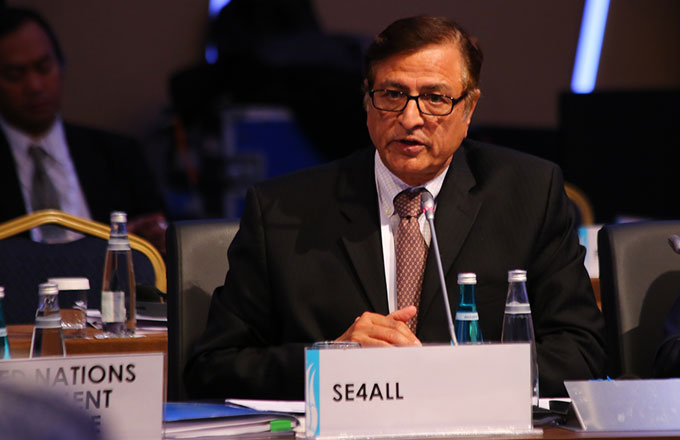 Mr Gulati stressed the benefits that could be drawn from stronger regional collaboration. “Regional solutions in Africa can help accelerate development of its energy resources by aggregating national markets, diversifying risks and reducing environmental impacts,” he said. Kicking off the afternoon Ministerial Session of the conference, Jay Ireland, President and CEO of General Electric Africa, stressed the need for the right business conditions to encourage investment in the power sector. These included a stable framework of access to essential inputs such as gas, or issues such as land leases for wind and solar power; confidence in tariff levels; risk management options; and the political will to see projects through to fruition. “When I first got to the region I was told by many that there was plenty of money for projects but no real bankable projects. I would talk with developers and they said there was no available money. Obviously a disconnect,” he said. “I can say there is no easy answer to shrink that divide, though we have been working at it.”

1 in 7 people globally at high risk due to lack of access to cooling, with numbers set to rise by 2030