Over 1 billion people across the world lack access to cooling and the implementation of passive cooling strategies is a solution to reach those most in need of cooling services. The Global Cool Cities Alliance (GCCA) works to accelerate a worldwide transition to cooler, healthier cities by advancing heat mitigation policies and programmes that reduce the effects of climate change on global warming.

Cool, reflective roofs are widely applicable – they absorb less of the sun’s radiation, which can reduce indoor air temperatures by 2–3°C and outdoor air temperatures by up to 10°C. In addition to increasing thermal comfort for people who do not have the means to access mechanical cooling options, cool roofs can help reduce the need for mechanical cooling, in turn reducing energy demand and cutting greenhouse gas (GHG) emissions. There is however a lack of awareness about cool roofs and markets in which to obtain them. GCCA’s successful Million Cool Roofs Challenge sought to find unique ways, informed by local conditions and ideas, to grow awareness and market availability at the local level. 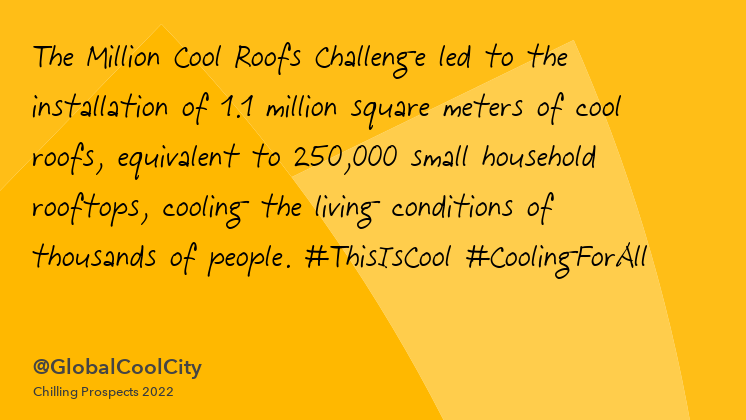 The Million Cool Roofs Challenge was a highly successful first-of-its-kind global initiative to rapidly accelerate the deployment of key passive cooling solutions in highly heat-vulnerable developing countries. Ten teams were selected to receive a USD 125,000 grant to establish markets, demonstrate and evaluate local performance, raise awareness with policymakers and local leaders, and install cool roofs. In most cases, the teams were introducing the concept of cool roofs for the first time to local markets. The Challenge led to the installation of 1.1 million square meters of cool roofs by 10 teams, despite many obstacles resulting from the COVID-19 pandemic. That’s an area equivalent to 250,000 small household rooftops, which effectively cooled the living, working and learning conditions of thousands of people.

But the Million Cool Roofs' successes go deeper than just the amount of area covered. Most teams reported indoor air temperature reductions of at least 2°C, with some teams seeing temperatures drop between 4.4°C and 10°C. The deployment of reflective materials helped the teams create hundreds of sustainable jobs and training opportunities for low-skilled workers in both rural and urban settings. One of the teams created a sustainable funding mechanism for the cool roof projects and almost all the teams have continued to work on additional roofs in both residential and public sectors.

The participants realized energy and cost savings from the reduced cooling demand and thermal comfort was improved for building occupants including school children, hospital patients and factory workers. Similarly, several of the teams were so successful that the programme helped to drive change in revising building code requirements. Kenya now requires passive cooling in its national building code and Indonesia is incorporating cool roofs into national low-income building specifications.

Additional benefits of the Challenge include the relationships that were established between the participants and local businesses.  In several cases, new businesses were formed to address the need for cool roof materials thereby creating a local supply chain. One team noted that the supply still outweighed the demand. Research was also conducted to assess the health benefits of improved thermal comfort.

The team from Indonesia won the Challenge due to the effectiveness of their project, their collaborative approach, and their plans for scaling up their work. During the Challenge, the team installed cool roofs on 70 buildings across 15 cities in Indonesia, including 36 low-cost housing units, 10 schools, two factories and one orphanage. In total, the team estimates that 10,250 people in Indonesia will benefit from the newly installed cool roofs.

GCCA’s vision is for cool surfaces (e.g., roofs, walls and pavements) to be widely adopted as a key strategy for keeping people safer and cooler in a warming world. Cooling is an essential component of modern life, fundamental for ensuring the quality of life and productivity of citizens. Yet around the world, millions of people die every year from causes related to a lack of access to cooling.

Scaling the use of cool roofs as a cost-effective, accessible, passive cooling strategy will require the development of a vibrant marketplace that ensures that materials are readily available at the community level. Success, in this case, will likely depend on the ability to catalyze the local supply chain to manufacture cool roof materials.

Creating a community of practice for passive cooling

Another key to success for accelerating the use of cool roofs for passive cooling is the formation of a community of practice. As seen in the Million Cool Roofs Challenge, funding is often a barrier to the adoption of new programmes that drive innovation. The community of practice would include a dedicated group that is willing to share the unique challenges of passive cooling markets and incubating solutions. The collaboration of multiple stakeholders will allow cool roofs to become commonplace, particularly in developing countries that are most in need of cooling strategies.