Energy is needed at all stages of the agri-food chain. The agri-food sector currently consumes 30 percent of the total energy demand globally, most of which is fossil fuel based. There are however differences in energy use patterns in the agri-food chain across regions. In developed countries, about a quarter of total energy is used in the production stage (crops, livestock and fisheries), 45 percent in food processing and distribution, and 30 percent in retail, preparation and cooking. In developing countries, a smaller share of energy is used in the production stage and a greater share for cooking.

While energy use in the agri-food chain increased by 20 percent between 2000 and 2018 globally, in Africa, it remained largely constant, accounting for only about 4 percent of global energy consumption (FAO, IRENA 2021). Limited energy access directly impacts local agri-food systems by reducing opportunities both to increase irrigation that would increase yields and to store food in temperature-controlled environments that would reduce food loss. This, in turn, limits food diversity.

While there is a need to increase access to energy to the agri-food chain in developing countries, following the conventional pathways of depending on fossil fuels will only exacerbate climate change. Renewable energy can be instrumental in increasing energy access in a way that minimizes greenhouse gas (GHG) emissions and it is becoming increasingly more affordable. The cost of electricity from solar PV and wind for instance decreased by 82 percent and 40 percent respectively between 2010 and 2019. (IRENA 2020). 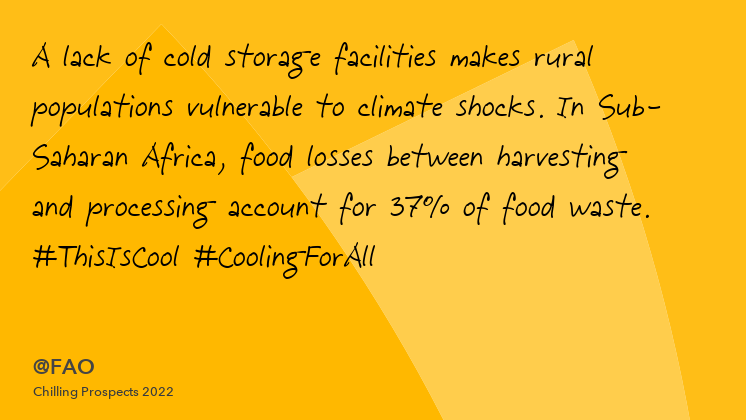 Over the last decade, the programme has supported countries across the world in developing evidence-based policies to increase the use of sustainable energy for the agri-food chain. Energy from the value chain can be in the form of bioenergy that uses crop and livestock residues for instance, while energy for the agri-food chain includes the use of renewable energy technologies like solar PV to increase cold storage and processing infrastructure.

A lack of cold storage facilities in developing countries makes rural populations more vulnerable to climate shocks and results in higher incidences of food losses. In Sub-Saharan Africa for instance, food losses between harvesting and processing account for 37 percent of food waste in the region. One of the reasons for the disproportionately high losses is the limited availability of electricity in rural areas where most of the food is produced. In Sub-Saharan Africa only 28.1 percent to the rural population had access to electricity in 2019 (World Bank 2019) which limits their ability to store food in a temperature-controlled environment.

One of the ways forward is to support developing countries to increase access to renewable energy to power cooling infrastructure. To do this, a multistakeholder approach is needed that requires farmers, the private sector and policymakers to assess and identify technologies that can be scaled up under specific country contexts.

FAO has already supported the Government of Rwanda in identifying and assessing the market size of decentralized solar cold storage for horticulture production and milk chilling and is currently working on a study to identify cooling needs and solutions for the value chain of small-scale fisheries globally. In the next three years, the expectation is that there will be an increase in the uptake of decentralized cold storage globally, especially for horticulture, dairy and meat value chains.

However, there is a need for governments to develop specific policies to increase the use of renewable energy to provide cooling along the agri-food chain. At the same time, stakeholders (public sector, private sector and funding institutions) need to encourage financial innovation to ensure that cooling solutions are affordable for small-scale farmers.

Meet our Cooling for All Advisor from the FAO

Cooling for food, nutrition and agriculture

Sustainable Cooling for All in Africa