In many parts of the world, access to affordable cooling is increasingly viewed as a societal need. Cooling supports positive health outcomes, higher productivity, and accelerated economic development. However, over 3 billion people in the world today face some risk to their health and safety due to a lack of access to cooling.

Increasing population and rapid urbanization, coupled with a warming planet are expected to drive the number of residential/room air conditioners (RACs) in use from 1.2 billion units today to 4.5 billion units by 2050. The electricity consumption associated with today’s RACs, combined with the atmospheric impact of the refrigerants used in these units, represents one of the single largest end-use risks to our global climate goals.

Herein lies the cooling dilemma: although increased access to cooling positively impacts the health, wellbeing, and productivity of people around the world, it comes at an environmental cost that we simply cannot afford. 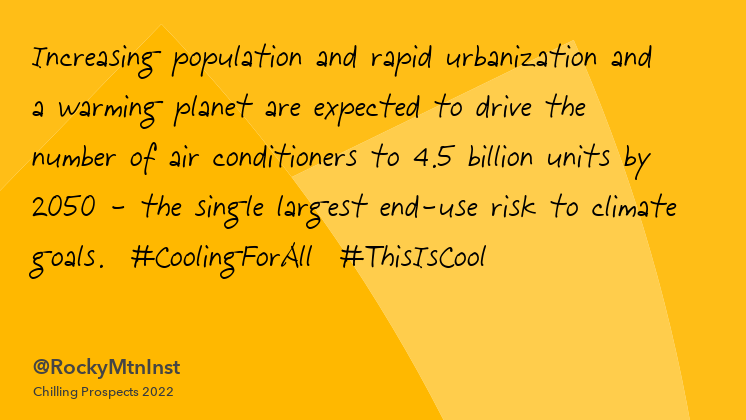 The Global Cooling Prize: An innovation challenge that shattered the performance ceiling for residential cooling

To spur the development of a super-efficient, climate-friendly, and affordable cooling solution, an international coalition launched the Global Cooling Prize in November 2018. The coalition was initiated by RMI; the Department of Science & Technology (DST) at India’s Ministry of Science and Technology; and Mission Innovation. The Global Cooling Prize was an innovation challenge focused on the RAC sector with a performance target of 5 times lower climate impact than typical units then being sold in the market. This level of performance implies 4 times lower energy consumption combined with a refrigerant that has low to no global warming potential (GWP). Together these innovations would be sufficient to solve the cooling dilemma as the access gap closes.

In April 2021, two teams — Daikin with partner Nikken Sekkei and Gree with partner Tsinghua University — were announced as the grand winners of the Prize. The winners were determined following the successful completion of prototype testing in India, both in an actual apartment building and under simulated real-world conditions in the lab. Both teams exceeded the 5 times lower climate impact criteria — a reduction of more than 80 percent with reference to the baseline unit (representative of the market-leading RAC in India in 2017).

Considering the operational savings due to the energy performance of the winning technologies, the total cost of ownership (i.e., cost to own and operate a unit over a 10-year period) was assessed to be about half that of traditional RACs. The winning technologies shattered the performance ceiling of what was previously believed to be technically possible for RACs, all while utilizing extremely low-GWP refrigerants and delivering on the promise of saving consumers money.

How did the prize succeed in catalyzing innovation?

Around the world, policymakers have traditionally driven energy efficiency improvements in RACs by pushing up the floor of performance through minimum energy performance standards (MEPS). While there has been a 1.7 percent average increase in efficiency per year globally since 1990, the progress lags far behind what is technically possible and what is needed to offset the massive rise in cooling demand. But it is not just about policies — most consumers focus on purchase price when making AC purchasing decisions, with little consideration given to efficiency and operating costs.

This market demand for ACs with a low purchase price has driven the industry to focus on economies of scale and cost optimization, as opposed to technological innovation and efficiency. Industry has simply followed the market. It is this market failure that is the root cause behind the sluggish pace of innovation in this sector.

The prize criteria addressed questions that the market and policymakers were not asking. This ultimately led to the successful identification and demonstration of 5 times lower climate impact technologies that have the potential to solve the cooling dilemma.

Reducing the GHG impact of cooling

Dramatically improving the efficiency and climate impact of RACs is likely the highest-impact near-term intervention that can be made in the cooling sector, considering the projected growth of residential cooling systems. A phased introduction of 5 times lower climate impact RACs starting in 2025 would reduce estimated GHG emissions by a cumulative 68 billion tons by 2050. But in our warming world, this alone will not be enough. We also need better buildings that keep cooler through design and passive cooling strategies, so that we don’t need as much installed cooling capacity. Additionally, we need better sensing and control systems so that cooling use is dynamically matched to demand. Further innovations in all these areas will be required to reduce the building sector’s massive energy and GHG footprint.

The Global Cooling Prize successfully identified, tested, and demonstrated the next generation of breakthrough residential cooling technologies, which now need to be commercialized and brought to market around the world.

In the lead-up to COP26, the UNFCCC launched a goal as part of the Race to Zero initiative to achieve net-zero residential cooling by 2050. The breakthrough outcome for this goal was defined as “20 percent of global AC manufacturers bring to market affordable RACs that have 5X lower climate impact than today’s units by 2025.” Gree (a winner of the prize) and Haier (a partner of prize finalist Transaera), which together produce well over 20 percent of the world’s  RACs, both signed on to this commitment.

RMI, in collaboration with Lawrence Berkeley National Laboratory, CEPT University of India, and the Clean Cooling Collaborative, is leveraging the learnings from the Global Cooling Prize to develop test methodologies and performance standards that can accurately measure the performance of these new technologies and more closely emulate the real-world operating conditions in the global south. The recommendations from this phase of work will be made available in early 2023 with a goal of adoption by 2025, when these technologies will enter the market.

These steps will in turn support greater ambition from policymakers and regulators to undertake targeted actions to raise minimum energy performance standards (MEPS) and stretch the performance rating systems to the level of these new RACs to better inform consumers. With the right policies, consumers will understand the benefits of the new RACs as they enter the market, allowing them to save money over the unit’s life cycle, provide more comfortable indoor conditions, and reduce the impact of AC use on the climate.

Meet our Global Panel on Access to Cooling member from RMI