Chilling Prospects 2022: Catalytic finance for energy-efficient, climate-friendly cooling for all in 2050

In 2016, 17 leading climate foundations and individual donors came together ahead of the Montreal Protocol meeting in Kigali, Rwanda, and pledged more than USD 50 million to create the largest-ever fund of its kind for action on energy-efficient, climate-friendly cooling. The following spring, the Kigali Cooling Efficiency Program (K-CEP) was established.

K-CEP was charged with strategically programming the funds to advance cooling appliance efficiency reforms alongside efforts to support the implementation of the global phasedown of hydrofluorocarbons (HFCs) under the Kigali Amendment to the Montreal Protocol. If fully implemented over the next few decades, the Kigali Amendment has the potential to avoid up to 0.4°C of global warming by the end of the century, with the enhanced energy efficiency of cooling doubling those climate benefits. Action on energy-efficient, climate-friendly cooling has the potential to significantly boost global climate action efforts.

K-CEP aimed to create meaningful impact and catalyze transformation within the cooling sector through work on institutional strengthening for efficiency; policies, standards, and programmes; finance; and increasing access to cooling.

During the first four years of the programme, K-CEP granted USD 50 million to 54 partner organizations for projects in 57 countries. This work not only produced quantifiable results but created the infrastructure and momentum necessary for continued impact within the cooling sector. 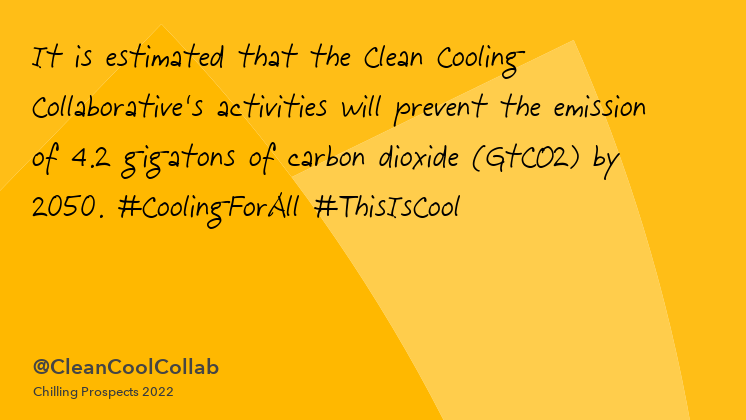 In terms of numbers, K-CEP supported the proposal, adoption, or implementation of 21 cooling appliance standards and labelling programmes around the world; the publication of nine National Cooling Plans; the development of three model regulation guidelines; and the mobilization of USD 600 million in investment. It helped with the formation of the Cool Coalition, which works to mobilize governments, industry, financial institutions, and businesses to act on cooling. It also enhanced its cooling knowledge base, built networks to power collaboration, and led a range of influential initiatives and partnerships.

Based on analysis from the International Energy Agency (IEA), it is estimated that K-CEP's activities, primarily the development of cooling efficiency policies and plans, will prevent the emission of 4.2 gigatons of carbon dioxide (GtCO2) by 2050.

Placing cooling on the global agenda

While it is easy to focus on the metrics, it is also important to consider the broader impact that K-CEP’s work has had so far. In addition to securing sizable greenhouse gas emissions reductions, K-CEP has helped place cooling on the global agenda. It has brought attention to an issue that was often overlooked in terms of both its human impact and mitigation potential and raised the alarm on the dangerous feedback loop that today’s conventional cooling can create, in which the very thing we need to keep us cool in an ever-warming world is significantly contributing to the heating up of the planet.

K-CEP’s work on cooling is linked to several international agreements, namely the Kigali Amendment through supporting the transition to climate-friendly refrigerants, the Paris Agreement through work on energy efficiency and its associated emissions reductions, and numerous Sustainable Development Goals (SDGs), including climate action (SDG13), sustainable cities and communities (SDG11), zero hunger (SDG2), and good health and well-being (SDG3), to name a few.

Building on the lessons learned during the programme’s first four years, and in response to the changing global context, K-CEP has recently reinvented itself as the Clean Cooling Collaborative and shifted the focus of its work to maximize its impact over the coming years. While it will continue to make grants available worldwide, emphasis will be placed on the four regions with the greatest contribution to cooling sector emissions over the next 30 years: China, India, Southeast Asia and the United States. Energy efficiency will remain a central focus of its work, but it is expanding its programme to include work on supporting the transition to climate-friendly refrigerants, as well as passive cooling solutions and other issues like cold chains and demand response.

Providing access to cooling for all in a warming world

Through this work, the Clean Cooling Collaborative hopes to continue to improve cooling by reducing (or avoiding) the need for mechanical cooling through improved building design and by optimizing mechanical cooling so that when it is necessary, it uses climate-friendly refrigerants and significantly less energy. It also wants to increase access to cooling, which is not only important for ensuring human comfort, productivity, and resilience, but also necessary to improve food systems by reducing food waste, improving farmers’ livelihoods, and enhancing nutrition.

With a goal of delivering energy-efficient, climate-friendly cooling for all for 2050, the Clean Cooling Collaborative is committed to securing the necessary transformation within the sector to provide people with access to the cooling they need in a rapidly warming world, in a way that minimizes energy use and greenhouse gas emissions in the most cost-effective way possible.