In 1991, Parties to the Montreal Protocol for the Protection of the Ozone Layer established the Multilateral Fund (MLF), the financial mechanism designed to provide financial and technical assistance to Article 5 Parties (developing countries) to the Montreal Protocol to comply with their obligations under the treaty to reduce the production and consumption of substances that are responsible for ozone depletion used in air conditioners, refrigerators and so on, and facilitate the transfer of new ozone-friendly technologies.

The MLF operates under the authority of the Montreal Protocol and oversight of its operations is through the Executive Committee whose membership comprises seven developed and seven developing countries. The Committee is assisted by the Multilateral Fund Secretariat, which is based in Montreal. The project activities are implemented by four international agencies – the UN Environment Programme (UNEP), the UN Development Programme (UNDP), the UN Industrial Development Organisation (UNIDO) and the World Bank - as well as bilateral agencies of non-Article 5 countries.

Since its inception, the MLF has supported over 8,600 projects in 148 countries including industrial conversions, technical assistance, training, and capacity building valued at over USD 3.9 billion. It has phased out 99 per cent of all ozone-depleting substances (ODS) or more than 283,000 of ozone depletion potential (ODP) tonnes of ODS consumption and 188,920 ODP tonnes of ODS production, a large portion of which are harmful refrigerants.

The success of the Montreal Protocol in phasing out ODS encouraged the global community to reduce the use of global-warming hydrofluorocarbons (HFCs), substances that are not ozone depleting but are powerful greenhouse gases that were used as replacements for ODS, especially for refrigeration and air-conditioning applications, as these were being phased out. In 2016, the Kigali Amendment to the Montreal Protocol was agreed, and included a list of 19 HFCs as controlled substances to be phased down. The MLF continues to support developing countries to reduce HFC use, following a schedule agreed under the Kigali Amendment.

As a financial mechanism, the success of the MLF can be attributed to the fact that it is dedicated only to the Montreal Protocol and as such, funding is designed around clearly defined targets and schedules, as well as specific substances that need to be phased out or phased down. Over the years, the assistance provided by the MLF to developing countries has supported a comprehensive approach: from the development of national plans that include building the capacity of recipient countries to sustain efforts to phase out ODS through technology transfer to support those industries that have to undergo conversion, to ensuring that the regulatory and policy framework to back up these actions is in place.

All developing country Parties are eligible for support from the MLF; funding is shared equitably among these countries and is based on their consumption of controlled substances. This approach assures that all developing countries are given the financial assistance they need for the phaseout and phasedown of different ODS.

Capacity building and training are an integral part of the support provided to countries to fully implement the requirements of the Montreal Protocol and its amendments. In the refrigeration and cooling sector, training for technicians supports and increases their knowledge for the safe capture of ODS, retrofitting of existing equipment and uptake of newer more energy-efficient technologies. Countries also utilize funding to increase outreach and awareness-raising activities to promote energy-efficient technologies and improvements. 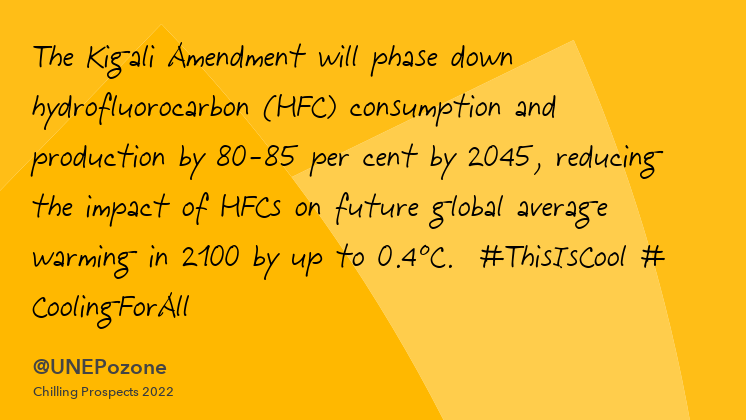 Impact of the Multilateral Fund

Funding from the MLF has enabled the total phaseout of 1.75 million ODP tonnes (98.6 per cent of ODS) of chlorofluorocarbons (CFCs) that are also greenhouse gases, globally. The remaining 1.4 per cent is mainly hydrochlorofluorocarbons (HCFCs), and countries are continuing the implementation of their remaining activities to reduce the use of these substances whose phaseout date is December 2030 (except for a small service tail for refrigeration equipment).

The Kigali Amendment will phase down HFC consumption and production based on the carbon dioxide equivalent (CO2 e) by 80–85 per cent by 2045. According to the Montreal Protocol’s Scientific Assessment Panel, this will avoid 2.8–4.1 billion tonnes of CO2 e (GtCO2 e) per year emissions by 2050 and 5.6–8.7 GtCO2 e per year by 2100, reducing the impact of HFCs on future global average warming in 2100 by up to 0.4°C.  Replacing HFCs also creates an opportunity to increase the energy efficiency of cooling equipment by 10–50 percent, significantly reducing energy costs to consumers and businesses.

Continuing implementation of HCFC phaseout plans and the parallel phasedown of HFCs, balancing funding and available time and resources will be a challenge for the MLF, Article 5 Parties and bilateral and implementing agencies. Recognizing the importance and intersection between ODS, energy efficiency in the refrigeration and air-conditioning sectors and other areas of work will require coordination and funding. As the world moves toward a greener future, and with the impact of ODS apparent across the environmental and climate change sectors, the relevance and importance of the MLF remain.

We can no longer look at issues such as climate change, the decline in stratospheric ozone, loss of biodiversity and desertification and land degradation as independent issues. The MLF’s support for national projects will not only help the ozone layer, but also address larger environmental concerns. Cooling access has also become an important issue that needs to be addressed in the context of achieving the Sustainable Development Goals (SDGs).

Chief Officer, Multilateral Fund for the Implementation of the Montreal Protocol

Chilling Prospects 2022: Catalytic finance for energy-efficient, climate-friendly cooling for all in 2050